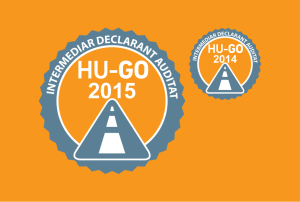 NUSZ Zrt the company which administrates HU-GO system is the only authority that can grant this certification, as a result of an annual audit. The collaboration between NUSZ Zrt and ETA Automatizari Industriale is represented by OBU one product which allows road toll payment in Hungary for vehicles which exceed the maximum imposed weight of 3.5 tons.

Road toll payment can be done thanks to data transmitted through GSM by OBU equipments, products delivered by ETA Automatizari Industriale and other authorized intermediates. The audit ensures that function specifications are being applied as provided in Service Level Agreement, signed between the intermediate and the Hungarian authority.

NUSZ Zrt applies this certification audit every year, analyzing rigorously all data provided by intermediates for each month from previous year.

ETA Automatizari Industriale is the only company with headquarters in Romania which received this certificate of ” Intermediate Audited Declarant”. At present, more than 600 international transporters use OBU One for road toll HU-GO payment. 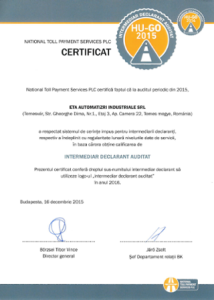 This site uses cookies for a better user experience. By continuing to browse the site, you are agreeing to our use of cookies. See details